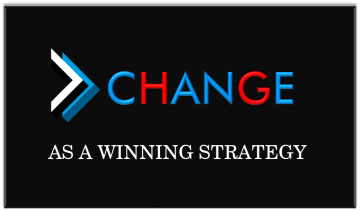 Winning: What does change have to do with it

The Need for Change

First, let me confess that the inspiration for the title of this article is Tina Turner’s 1984 hit single, ‘What’s love got to do with it?’, which broke a number of records at the time. Parodying the Grammy award-winning song, ‘what does change have to do with winning in management?’

Someone has said that the only thing constant in life is change.

Whether we like it or not, change happens, or to borrow from Dr. Spencer

Johnson’s seminal parable, the cheese keeps moving[1]. This holds true in management and leadership. Whether each of us thrives or survives in today’s ‘dog-eat-dog’ context is dependent on our level of anticipation and preparedness.

Charles Darwin is quoted as saying, ‘It is not the strongest of the species that survives, nor the most intelligent, but the one most responsive to change’. The dinosaur is extinct today because it did not adapt to its changing habitat and increased competition for the limited resources within the ecosystem.

Many people and organisations have become dinosaurs or in danger of becoming one because they did not anticipate and/or adapt to change, consequently becoming irrelevant.

Today’s market leader can become tomorrow’s market deadbeat. Sony Betamax, despite having first-mover advantage in the 1970s, lost the Video recording (VCR) battle to rival JVC’s VHS( Video Home System) by ignoring the VHS format for over a decade and not delivering value on a dimension that mattered to consumers (such as longer recording times for each cassette that could contain a whole movie), whereas JVC did. By 1987, VHS had 95% share of the market, and in 2002, Sony was forced to discontinue the Betamax format[2].

Polaroid, the pioneer of instant photography is near extinction today because it was slow to anticipate and respond to future trends such as digital photography and one-hour photo shops.

Today, competition for consumers pocket and throat is intense. If we do not change for good, our food would be eaten up. The same applies to people.

Brands (and People) that don’t keep up can get lost quickly,’ says Peter Post of Canadian marketing firm Cosette Post in a brandchannel.com article by John Kavolefski. ’They first  become irrelevant, then invisible, and then they are gone.’ Instead of exploiting the opportunity offered by digital photography, Polaroid was concentrating on developing a 35mm colour print film.

The Challenge of Change

The flight or fight response to change comes from fright; people are generally afraid of change. Many times, brands, businesses and people fight change because of nostalgia, holding on to the past. Whilst nostalgia can be a powerful selling force, it can ultimately make a brand or person irrelevant to the present market. The past should be a guide, not a hindrance.

We could survive if we choose the third possible response to change i.e. merely follow the change or being a trend-follower. Whilst this is a more positive choice than the flight and fight choices, it is also reactive and does not help to build leadership.

We thrive when we are proactive and fan the embers of change i.e. be a trend spotter and setter. As is attributed to Abraham Lincoln, the 16th American president who inspired the abolition of slavery in the United States, the best way to predict the future is to create it.

In Kenya where I lived for a few years, the steering wheel of cars is on the right and people drive cars on the left, the opposite of Nigeria.

Therein, more than the Swahili language, lay my most pressing challenge in my first few days in Kenya, as I had driven right-hand steering cars on the left side of the road most of my life.

Before leaving Nigeria, I had been advised not to drive for a month as it could take that long to adjust to driving on what, for me, would be the ‘wrong’ side of the road. However within the first four days, I began to drive myself as the person assigned to chauffeur me chose to go AWOL! I also had the added task of finding my way around in a new city.

I was initially fearful of the new driving experience: would I be able to change gears with my left hand being very right-handed? Would I understand the

different driving rules and habits and at the same time find my way around? Would I be safe and not get lost? I had to conquer my fear. I did. To do otherwise by taking flight or fighting would have left me with the option of commuting by Matatu, the Kenyan equivalent of the Nigerian Danfo.

The fact that I had anticipated the change and prepared for it helped secure my victory over fear of the new driving experience. I visualized myself driving safely. I had a roadmap with me to help find my way. When I lost my way, I sought direction from those who knew. The traffic rules and habits in Kenya were not going to change because a new Nigerian had arrived Nairobi. I was the one to change. The more I drove, the more confident I grew with each passing day; I am sure a few swear words especially from Matatu drivers came my way as I drove, but fortunately I didn’t understand them, and eventually I enjoyed driving on the ‘wrong’ side of the road in Kenya.

If we desire to grow as individuals, brands or organisations, we must be prepared to change, and exit our comfort zones. Echoing Mahatma Ghandi’s popular quote, be the change you want to see.

Using a driving symbol (or more appropriately, a non-driving symbol), a parking meter reminds us that we lose money standing still.

We must be prepared to shed habits or strategies that hold us down. Metamorphosis is what transforms a caterpillar to a butterfly. Growth comes from change.

Someone else, possibly a psychiatrist, has defined insanity as ‘doing the same thing all the time, and expecting different results’.

What would sustain a brand, business, organisation, person or nation is the capacity to anticipate or create change and stay relevant to its stakeholders.

Coca Cola is one of the world’s oldest brands yet the world’s most valuable brand because it has sustained its relevance. Apple and Nike are vibrant brands. They take risks and forge into new territories. They are not trend-followers but trendsetters. In 1997, Apple was in the throes of a significant downturn when Steve Jobs returned as CEO. He changed

everything. He tore up all the plans and started over. Apple’s new advertising campaign was centred around the theme, ‘Think Different’[3].

The Bournvita brand, Cadbury Nigeria’s flagship brand had to do same in the late 1990s and early 2000s to redress prior years of volume decline and share loss and weakened market leadership in the Nigerian food drinks market. The brand embarked on an extreme makeover of all the elements of its marketing

mix: the product formulation was improved to address consumer concerns; packaging colours changed from the brown coat it had worn for over forty years to purple to reinforce; the brand was re-positioned from being a ‘vitality drink’ for ‘everybody’ to being a drink primarily to nourish children who research had confirmed to be the core consumers; its promotional efforts: pay-off line, communication, sales, promotions and sponsorships were aligned accordingly; pricing became more premium.

The end result was significant improvement in sales volume, revenue and profit, as well as improved market share to consolidate its market leadership.

Paula Radcliffe of Great Britain, the woman who as at 2008 had four of the five fastest times in female marathon history had to go through change

to become a champion marathoner[4].

The story of how she journeyed to become one, from a disappointing fourth in the 10,000m at the 2000 Olympics Games in Sydney, missing out narrowly from a medal, through the repeat disappointments in both the 10,000m and marathon at the 2004 Athens Olympics is worth re-telling[5] .

Paula Radcliffe was not winning the big races because she did not have finishing power; she was running her last lap in a 10,000m race in 67-69 seconds, while her competitors, such as Catherine Ndereba a Kenyan who has one of the fastest times in female marathon history, could close in 59 seconds. Any one who was with her during a race that had the capability of running between 62 and 64 seconds was going to beat her. That was what happened at the 2000 Olympics in the 10,000m when she lost out

of the medal range despite leading for 24 laps out of 25. What had to change and which did was her strength-to-power ratio, her ability to act-react.

It is not enough to start well; we must finish strong.

Another weakness Paula had was losing lots of energy through exaggerated nodding of her head. Through specific exercises, she straightened up and her running poise and posture became better. We must cut out things that dissipate energy and resources. Radcliffe’s preparation became scientific; her sweat rates were measured, as was how much of specific nutrients she would need to replenish as she ran. The learning here is that businesses and people need to become even more fact-based in their decisions.

Radcliffe was faithful to the system that made her a world-class performer. Organisations and people should not betray their core positive values. The well-documented Coke Classic story is an excellent case study in this respect.

Paula also had a one-track mind (forgive the pun). In other words, Focus is key. Too often, people and organisations get distracted by things that do not really matter and lose single-mindedness on important goals.

Probably the most significant lesson from Paula Radcliffe is that she achieved what she did despite suffering from chronic asthma. What is it that keeps us down?

The Heart for Change

The question that arises from the fact that Paula Radcliffe became a champion marathoner despite her asthmatic condition is this: what is that obstacle that we would allow to prevent us from achieving big, hairy and audacious goals (BHAGs)?

‘Daring to Win’ is the title of a book written by Jack Cranfield and Mark Victor Hansen[6]. It is based on Napoleon Hill’s[7] philosophy that ‘whatever man can conceive and believe, he can achieve’[8]. I would add ‘with God’s grace’. Paula Radcliffe apparently subscribed to this. As did Mungo Park and David Livingstone. Both men were Scotsmen. Both were medical

fixed resolution to discover the termination of the Niger and though I myself half-dead, I would still persevere…’[9]

In this Age of Competition between people and organisations we need such dedication and determination to win. We need to be proactive about change and be the change we want to see. We need to be self-motivated. We need to do different things differently. We need to dare to win.

John F. Kennedy, the 35th president of the U.S.A said, ‘Time and the world do not stand still. Change is the law of life. And those who look only to the past or the present are certain to miss the future’. We need a heart of change and change for good if we are not to miss the future and become history.